I recently bought a new car, the first brand new car I’ve owned as a matter of fact. Every time I open the door a powerful waft of ‘new car smell’ assaults my nostrils and I inhale deeply.

Was I happy with my new purchase when I drove it off the car yard? Yes, I think I probably was. Despite this, I felt a certain sense of doubt and uncertainty creep in at the amount of money I had just spent and the implications for my bank balance.

Most of us are familiar with the concept of buyer’s remorse. No matter how much research and due diligence you’ve done prior to making your purchasing decision, as soon as that new (often expensive) purchase has gone through, a nagging sense of unease and doubt can often rear its head.

The good news is that buyer’s remorse usually fades as quickly as it arrives and you can generally make yourself feel better by gazing at whatever shiny new object you just bought and thinking, “It was worth every penny!”

Sellers remorse on the other hand, is a far more insidious and terminal condition. You’ve spent weeks, sometimes months pursuing a strategic sale. You’ve lived and breathed the deal, poured your blood, sweat and often tears into it, only to be told …

”I’m sorry, we’ve decided to go with company X, this time … we really appreciate all your hard work though”.

Like many other contagious diseases, seller’s remorse can be a cruel and lonely condition to suffer from. Work colleagues give you a wide berth, saying they don’t want to disturb you, but really meaning they don’t want to associate themselves with the poor unfortunate soul who just lost the really big, really important deal for the company.

The old adage, “Success has many fathers, but failure is an orphan” has never rung truer than after a big loss. You’re still struggling to come to terms with what just happened, asking yourself over and over again ...

“What could I have done differently?”

... as Dido’s voice gently soothes away your pain in the background.

Those of you who know me, know I’m a bit of a zealot when it comes to analysing sales wins and losses. I strongly believe that if you’ve behaved professionally and with integrity during the sales cycle, you have earned the right to conduct a debrief with your prospective client.

Although fewer than 5% of companies conduct Win Loss Analysis programmatically, the feedback and insights you receive in this final, critical step of the sales cycle is invaluable and may well represent the difference between your next big win and your next agonising loss.

By peeling back the layers of an organisation's selection process to get to the heart of their decision making criteria, you’re receiving one of the greatest gifts any company could wish for, clarity on what you are doing well and an understanding on where you need to lift your game.

If like me, you’re keen to help eradicate the terrible scourge of seller's remorse, then I’d strongly encourage you to start analysing your wins and your losses as a matter of course, before that Dido album finally wears out! 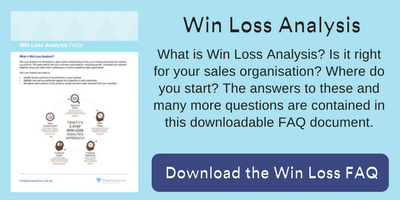