The things we think and do not say

It was 1am in the Miami Hilton and something snapped inside Jerry Maguire. He sat down to write a Mission Statement, outlining his vision for the future of the sports management business. Jerry’s mission was to change the face of his industry. He knew that something was wrong, that something had fundamentally changed ...

“There is a cruel wind blowing through our business. We all feel it, and if we don’t, perhaps we’ve forgotten how to feel. But here is the truth. We are less ourselves than we were when we started this organisation”.

But Jerry wasn’t sad or angry, because he had a vision for the future. A way to re-capture what was good and decent about his business, a chance to focus more on personal relationships and less on personal fortunes. As he explained:

It is too easy to say "later" because we all believe our work to be too important to stop, minute to minute, for something that might interfere with the restless and relentless pursuit of forward motion. Of greater success. Make no mistake, I am a huge fan of success. But tonight, I propose a better kind of success. I could be wrong, but if you keep reading and I keep writing, we might get there together.”

For those that would like to read the whole Mission Statement (and I recommend you do) you’ll find a full transcript here.

As I sit here, its 1pm on a sunny Sydney afternoon and I’m also a man on a mission. I spent more than 15 years working in the enterprise sales industry, an industry that though often maligned, plays a critical role in keeping the wheels of the economy turning. During that time, I often found myself "With Things I Thought And Did Not Say". Nowadays I get to spend time with lots of young salespeople, as well as senior sales reps and experienced sales leaders. The vast majority are dedicated, decent and hard-working individuals, committed to delivering a great outcome for their clients and partners.

It took me many years and lots of soul searching to recognise a fundamental problem with the sales industry. We simply don't understand why we are winning and losing the deals we pursue. Don't get me wrong, we have lots of theories, which we we're only too happy to discuss and debate, but let's be honest, we're often wide of the mark. Which means the next time we compete for a deal, without having understood the real reasons for our past wins and losses, we're effectively flying blind. Until we take the time and the initiative to engage in a dialogue with the only audience that really matters, our customers and prospects, to understand what really took place, we're destined to continue repeating our mistakes.

I’m sure it will take many more years and lots more soul searching to fix this problem, but that’s OK because just like Jerry Maguire, I have a vision. This short video should give you a better understanding of the problem I'm trying to solve and my vision for changing the enterprise sales industry for the better.

Some of you may already be doing this, although statistically less than 10% of sales organisations are, but what I really want to achieve is a groundswell of support and momentum for Win Loss Analysis within the sales industry. As an industry, as individual sales reps and sales leaders, let's take ownership of improving the perception of our personal and professional brands. Let's do our utmost to extract some valuable insights from every piece of business we pitch for, win, lose or draw. Let's make a commitment that we won't lose a deal for the same reason ever again and that we'll share the insights from our wins with our colleagues and peers.

In the movie, Jerry's Mission Statement and impassioned plea to his colleagues was met with lots of awkward shifting in seats and a profound silence from his peers, until finally Renee Zellweger agreed to accompany him on his journey. I'm hoping not too many of you are shifting awkwardly in your seats, thinking that all sounds too hard and confronting and silently opting to stick with the status quo? Either way, I'm interested to hear your thoughts. 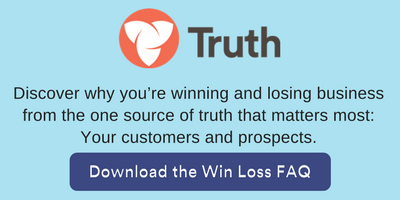